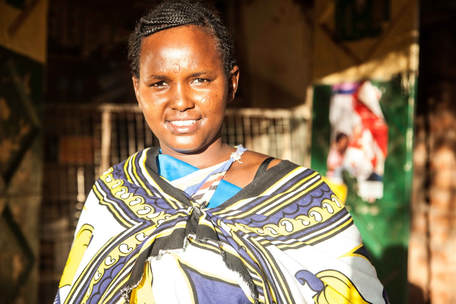 Meet Rehema Solomon of Namalulu village, Simanjiro District
Rehema is a female representative on the Nemalulu Village Land Use Planning (LUP) Committee. Rehema’s involvement in LUP began when UCRT facilitated some general training on LUP and the land act in her village. She attended the training, and from there her interest developed      further. In particular she wanted to understand the rights of women to own land.

Rehema was elected to the LUP Committee by her female peers as one of the female representatives of the 50% female, 50% male committee. She has been delighted to see the positive changes following the LUP discussions and development, and she is delighted to be part of leading the changes. She is driven in her LUP activity because she wishes to see more land allocated to women.

​Rehema is passionate because she feels she has been blessed to receive more education than many women in her village, and has had access to the LUP information and training. As a result she now feels it is part of her responsibility and duty to help the women around her to understand and stand up for their rights.

She became a passionate leader and advocate initially through her involvement with the Nemalulu WRLF. During her time in the forum she initiated a women’s support coalition where the women of her village help each other as needed – for example recently the women pooled their individual funds to assist another women to cover school fees for her children when she couldn’t afford it.

Rehema remembers the first time she ever spoke out publically for her village community. It was at the 2014 Village General Meeting. When the subject of land entitlements came up Rehema stood up and addressed the Village leadership and entire local community about the issue of women inheriting land following death or divorce from a husband. She remembers feeling nervous but brave, and she spoke up very politely. She was so proud of herself when the men responded positively to her points and agreed with her. She followed up her point with discussion about women’s rights to stand as leaders for the village and have a role in decision making. That was the beginning of her role as a spokesperson and leader for her community.

Rehema has known of many women in her community that have been impacted by inheritance issues in the past. Recently a woman in Nemalulu village was divorced from her husband and left with only her clothes and a single donkey. Thanks to support from the WRLF, the woman’s case is now in court for resolution.

When asked about the support she receives from her community as a leader and spokesperson, Rehema says she thinks her fellow women elected her because of her education and her natural advisory role within her personal spheres. The support and encouragement she receives has developed Rehema into a confident public speaker and good communicator with leadership and her WRLF collective.
​
Rehema is the second of two wives, and has three children – two boys and one girl. Recently Rehema started her own small business – a small general store in town. She says that as a leader she has a responsibility to set a good example, as a woman who works and is able to support herself and her family. She hopes her example may help empower other women in Namalulu to pursue economic independence.
Copyright 2020 Ujamaa Community Resource Team - All Rights Reserved